Overview of the project

We are developing a network of underground pipelines that will safely take low carbon hydrogen produced at Essar’s Stanlow Manufacturing Complex near Ellesmere Port to various industrial organisations.

The pipeline will also transport hydrogen to blending stations in Warburton and Partington (near Manchester) where it will be blended into the existing gas network to heat homes and businesses. The project will also link to underground hydrogen storage facilities that will be used to balance supply and demand.

Our pipeline will support the UK’s drive towards a net zero future and will unlock permanent jobs in the region.

The pipeline will be underground, although we will need some additional above ground infrastructure, known as Hydrogen Above Ground Installations (HAGIs), at various locations along the route. 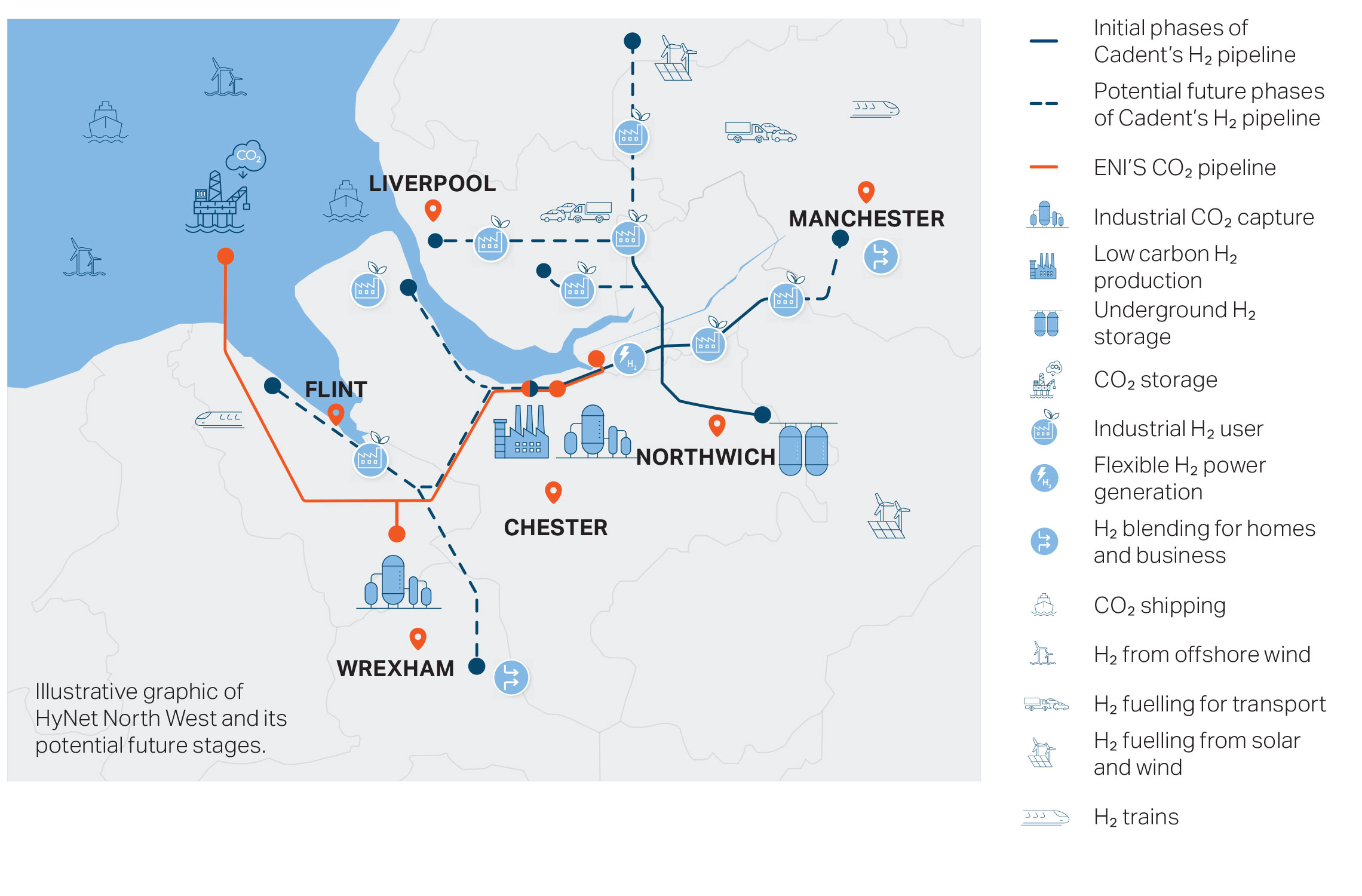 We are currently at an early stage in our work. So far, we have developed a broad route corridor within which the pipeline could be routed. We have also identified search areas for where our Hydrogen Above Ground Installations (HAGIs) could potentially be located.

We held our first, non-statutory stage of consultation on these early proposals from 26 January 2022 to 11 March 2022. This consultation has now closed.

Thank you to everyone who took part in the consultation and came along to one of our eight in-person and two online events. We're currently considering all the feedback we've received, alongside further technical and environmental work, as we work to develop a more detailed design for the pipeline network.

We will present this more detailed design, alongside our preliminary environmental work, at our second, statutory consultation this autumn, during which people will have another opportunity to provide feedback.

Click here to view our interactive map and find out more about our proposals.

The HyNet North West Hydrogen Pipeline is a Nationally Significant Infrastructure Project. This means we will apply to the Planning Inspectorate and Government’s Secretary of State for Business, Energy and Industrial Strategy for a Development Consent Order (DCO), in accordance with the Planning Act 2008.

As part of the DCO process, we will be carrying out consultation and engagement with stakeholders and local communities. This will be undertaken throughout the pre-application phase during our two rounds of public consultation.

Find out more about the DCO process

Hydrogen doesn’t typically exist by itself in nature and must therefore be manufactured using one of a variety of processes. Each process adds cost and, like all energy transformation processes, comes at the cost of some efficiency. However, once energy is converted into hydrogen it can be stored and transported and then turned back into other forms of energy. This makes it tremendously versatile, capable of uses in the power, heat and transport sectors.

To make this happen we must change the way we get our heat and hot water. In the UK, more than 80 per cent of fuel for heat comes from natural gas.

This means we need to transition to greener forms of gas. Instead of natural gas that is produced from fossil fuels, we need an alternative source, and that gas is hydrogen. While most hydrogen today is produced in ways that also emit greenhouse gases, it is possible to produce it in ways that are low carbon, therefore supporting our net zero ambitions.

From 2025, the aim is for HyNet North West to produce, store and distribute such low carbon hydrogen, as well as capture and store carbon from industry in the North West of England and North Wales.

What solution does hydrogen offer?

Traditionally we have burned fossil fuels (such as natural gas) to produce the energy we need day-to-day for cooking and heating our homes, as well as providing power for industrial use. But this produces carbon dioxide, a greenhouse gas that contributes to global warming.

Hydrogen offers a clean alternative source of fuel that doesn’t release harmful emissions into the atmosphere.

Hydrogen can also be used in multiple sectors which presents an opportunity to reduce carbon emissions across different industries, in power generation, transport, and in our homes and businesses.

What’s the difference between blue hydrogen and green hydrogen?

This is produced by ’splitting’ natural gas. Carbon dioxide is a by-product of this process, which is then captured and stored underground, offshore. Blue hydrogen can be regarded as ‘low carbon’ provided that almost all carbon dioxide created during production is captured and stored – just as we are doing with HyNet, with capture rates of 97 per cent.

By 2030, the Government is aiming for 5GW of low carbon hydrogen production capacity to be used across the economy.

To achieve this, organisations from across the energy industry must work together to scale up low carbon hydrogen production.

Please register your contact details with us if you would like to be kept informed about our project.